The only way to change the Australian Constitution is by holding a referendum. This means that the constitution cannot be altered without ‘the approval of the people’.

The AEC is an independent statutory authority and is responsible for the machinery of the referendum only. It has no involvement with the campaigns for or against the proposed changes to the Constitution.

How a referendum works

There are a number of essential steps involved in holding a federal referendum.

1. A Bill is passed by Parliament

Before a referendum can be held, a bill outlining the proposed changes to the constitution must be passed by both houses of the Federal Parliament or alternatively passed twice in either the House of Representatives or the Senate. The referendum must be held no sooner than two months and no later than six months after the bill is passed.

The Governor-General issues a writ for a referendum which, like an election must be held on a Saturday. It can be held with an ordinary election but can also be held separately.

4. Information is provided to voters

To ensure voters are well informed on the proposed changes to the constitution, the AEC then organises the printing and distribution of  information booklets to every address on the electoral roll outlining the proposed alterations to the Constitution and the ‘yes’ and ‘no’ cases provided by parliament.

Enrolling to vote in a referendum

It is compulsory by law for all eligible Australian citizens aged 18 and older to enrol and vote in referendums and federal elections.

If you are already enrolled you do not need to enrol again to vote in a referendum. You can check your current electoral enrolment online.

Polling day for a referendum will be a Saturday with polling places open from 8am to 6pm. Voters should vote on polling day if they can. For people who cannot make it on polling day there will be early voting centres and postal voting available.

Further information about voting services for any future referendum will be made available when legislation is passed and a referendum period is known.

To make sure your vote is able to be counted in a referendum, you need to clearly write either ‘Yes’ or ‘No’ opposite the question - as per the instructions on the ballot paper.

We will always admit a ballot paper to the count where the voter’s intention is clear but any marks or words other than ‘yes’ or ‘no’ (e.g. the use of a tick or check mark) could leave the formality of your vote open to interpretation or challenge. Ultimately, if challenged, the relevant AEC Divisional Returning Officer will decide if your ballot is deemed formal or informal in accordance with the Referendum Act. 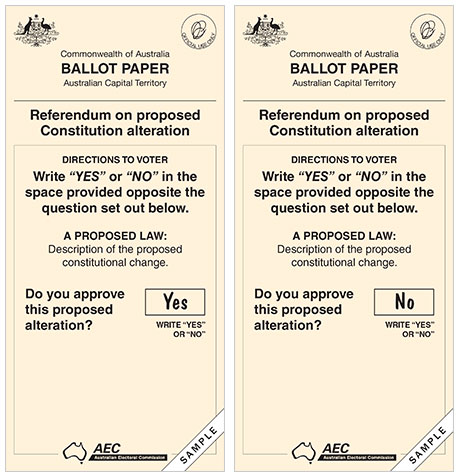 How is a referendum carried?

At the referendum the proposed alteration must be approved by a 'double majority'. That is:

The  votes of people living in the ACT, the NT and any of Australia’s external territories count towards the national majority only.

Since Federation there have been 44 proposal for constitutional change put to Australian electors. Only 8 of these have been approved.